The Memorial Atomic Bombing Ceremony in Hiroshima and Nagasaki 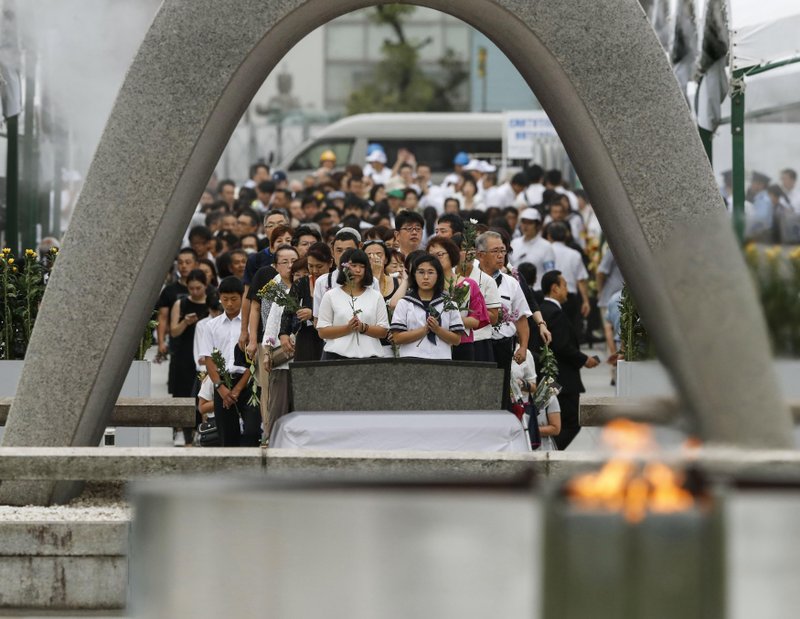 People pray for the atomic bomb victims in front of the cenotaph at the Hiroshima Peace Memorial Park in Hiroshima, western Japan during a ceremony to mark the 74th anniversary of the bombing Tuesday, Aug. 6, 2019. (Kyodo News via AP)

This year on 6 and 9 August, Japan marked the 74 th Peace Memorial Commemoration ceremony of dropping the atomic bombs in Hiroshima and Nagasaki by the United States, as a time of remembering the danger of the nuclear calamity in the past and reclaiming a future without nuclear weapons to live peacefully.

The Peace Memorial Park near Ground Zero in Hiroshima was chosen to commemorate the 6 August atomic bombing and the ceremony was attended by the city’s mayor Kazumi Matsui, along with the Prime Minister of Japan, Shinzo Abe. The Hiroshima’s mayor delivered a message about the rise of self-centered politics in the world and urged Japanese leaders to steadily work toward achieving a world without atomic weapons. Meanwhile, the ceremony for the 9 August commemoration was held at the Peace Park in Nagasaki. It was also attended by the city’s mayor Tomihisa Taue, together with the Prime Minister of Japan. For this ceremony, the mayor called for the Japanese government’s efforts in upholding the spirit of ‘never resort to war’ enshrined in the Japanese Constitution and taking the lead in disseminating that spirit around the world. Furthermore, both mayors urged the Japanese government to join a U.N. treaty banning nuclear weapons and ratify the Treaty on the Prohibition of Nuclear Weapons (TPNW) and encouraged Japan to take a side under a “non-nuclear umbrella”, as now Japan is a close U.S. ally protected by America’s extended nuclear deterrence or “nuclear umbrella”. This message has been delivered for three times by both mayors in their peace declaration speeches.

In response, at the ceremony Prime Minister of Japan, Shinzo Abe, delivered a speech stressing the importance of continuing efforts to realize “a world free of nuclear” and Japan’s role to eliminate nuclear weapons remains unchanged in the Reiwa era. Japan would continue to promote policies that considerate of “hibakusha”, the survivors of the bombing, as Japan is the first, the last and the only nation to have ever experienced atomic weaponry firsthand. In addition, Japan is committed to serve as a bridge between nuclear and non-nuclear states and lead the international effort, while patiently trying to convince them to cooperate and have a dialogue. The Prime Minister also vowed to maintain Japan’s pacifist and nuclear-free principles, yet did not promise signing the treaty. Moreover, at a news conference after the ceremony, the Prime Minister had repeated that Japan does not consider to take part in the treaty which does not reflect security.

Likewise, the Minister of Foreign Affairs mentioned that the treaty splits two sides between nuclear weapon states and non-nuclear nations with having a different perception on approach of achieving a nuclear weapons ban and the treaty itself, for instance, a gap among non-nuclear nations over how realistically they should achieve the goal. Practically, an effort to abolish nuclear weapons has been also increasingly complicated by developments surrounding nuclear powers.

The Treaty on the Prohibition of Nuclear Weapons (TPNW) was established due to enormous frustration on the lack of disarmament progress under the 1968 Treaty on the Non-proliferation of Nuclear Weapons (NPT). It supposed to be seen as the cornerstone of the international nuclear disarmament and non-proliferation regime. However, disarmament process was acknowledged as “slow and even come to a halt”, and there was still no equivalent nuclear weapons convection (NWC). Therefore, the United Nations initiated a meeting in New York, in a historic vote on 7 July, 2017 with the support of 122 nations who adopted the TPNW.

Being the most significant multilateral cooperation on nuclear arms control since the adoption of the NPT, the TPNW bans the acquisition, development, production, manufacture, possession, transfer, receipt, testing, extra-territorial stationing, and use and threat of use of nuclear weapons. In the view of nuclear weapon states, the TPNW risks jeopardizing international security by damaging the NPT and undermining nuclear deterrence. Japan is not alone in staying outside the treaty, for example, some nuclear-armed nations using weapons as a deterrent for major-scale destruction, and other countries under the U.S. NATO and Pacific allies such as Russia, United Kingdom, France, China, India, Pakistan, Israel and North Korea. However, this matter left the “hibakusha” heartbroken.

Back to the history, the U.S. dropped the atomic bombs to Japan because the country was not ready to surrender unconditionally before the end of the Second World War. As the result, the U.S. used the nuclear weapons as the main option for two primary reasons: First, the U.S. wanted to hasten its victory over Japan without the aid of the Russians, who were about to enter the war; second, and more importantly, President Harry Truman intended to threaten the Russians and to warn them not to challenge U.S. plans for organizing the postwar world.

In July 1945, the American military selected four “A” and “AA” cities to demonstrate the
devastating power of the atomic weaponry - the “Manhattan Project”, the U.S. atomic weapons development program under the joint responsibility of the Office of Scientific Research and Development and the War Department after the U.S. entry into the Second World War, starting in 1940. There were Hiroshima, Kokura, Niigata and Nagasaki. Hiroshima was chosen first owing to its compact topography, strategic port and hosting of two major army headquarters. The atomic bomb made by highly enriched uranium-core-235 named “Little Boy” was dropped in Hiroshima, resulting to that almost 63% of Hiroshima’s buildings were destroyed and a further 29% were damaged by this atomic bomb or “genbaku”, yet Hiroshima’s devastation failed to elicit immediate Japanese surrender. Hence, three days later, the U.S. Army targeted Kokura as the second place of bomb dropping because Kokura was the home to the Japanese Imperial Army’s massive Kokura Arsenal. Due to fuel running low at warplanes, the crew decided to proceed the alternate target, Nagasaki, which was 95 miles away. Finally, another nuclear weapon made by plutonium-core-239 named “Fat Man” was released to Nagasaki, instead of Kokura.

Consequently, Japan’s surrender ended the Second World War with many thousands people more had suffered and died due to the effects of nuclear radiation. Document recorded that the U.S. attack on Hiroshima had killed an estimated 140,000 people. Another bomb in Nagasaki claimed an estimated 70,000 lives who mostly were civilian.

This year's commemoration of the bombings at Hiroshima and Nagasaki came on the heels that the U.S. formally pulled out of the Intermediate-Range Nuclear Force (INF) Treaty after accusing Moscow of noncompliance. The ceremony in Hiroshima was marked with a moment of silence at 8.15 a.m., the exact time on 6 August 1945, when the “Little Boy” was dropped by a U.S bomber and exploded above Hiroshima. The ceremony also was attended by some 50,000 people, including “hibakusha”, Japanese adolescence and youth, as well as representatives from 90 countries, such as the United States, Russia and the United Kingdom, etc. The ceremony was continuously followed by the paper lanterns or Peace Lantern, symbolizing a peace offered, floated in the river at the same venue in the evening. Meanwhile in Nagasaki, a moment of silence was observed at 11.02 a.m., the exact time on 9 August in the same year when the “Fat Man” was dropped by a U.S. bomber and exploded over the city, three days after the United States dropped the world’s first atomic bomb on Hiroshima. In the ceremony, there appeared around 5,200 people and representatives from around 70 countries including all five recognized nuclear powers- Britain, China, France, Russia and the United States as well as the United Nations and the European Union. Likewise in Hiroshima, the people also showed the peace symbol by candle, yet it was a day before the ceremony in Nagasaki.

Despite having a direct experience of nuclear weapons in the Second World War, Japan still takes serious consideration on several aspects regarding signing the Treaty on the Prohibition of Nuclear Weapons. One factor might be related to Prime Minister Abe’s concern on security cooperation with the U.S. and other U.S. allies, such as NATO members, South Korea and Australia.