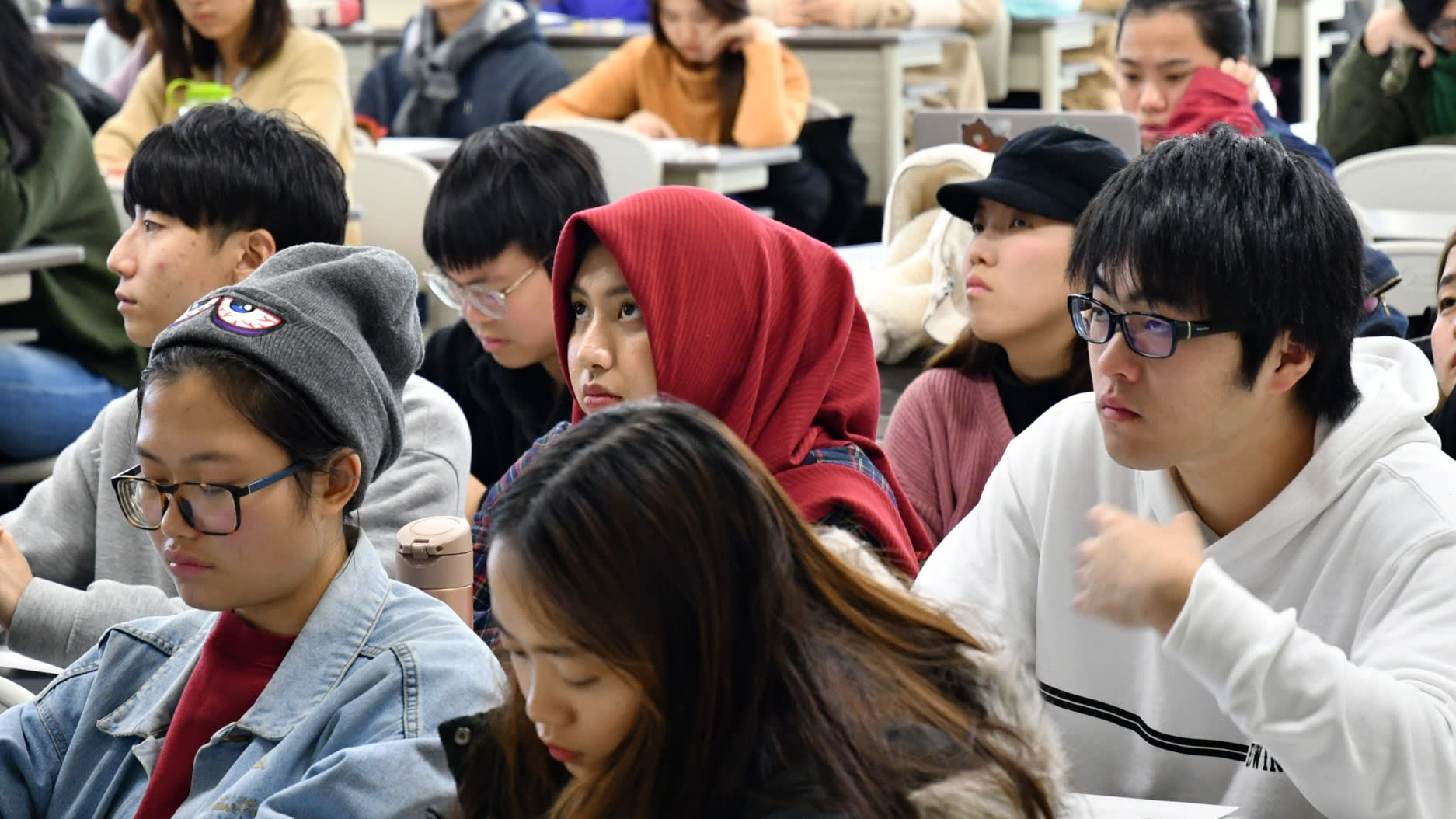 A foreign student attends class at a university in Oita Prefecture. The government is moving to make it easier for graduates of regional schools to get work visas and remain in those areas. (Nikkei)

Last decade, OECD reported that the higher education sector in Japan was in need of extensive reform in order to cope with the oppression of the globalization as there was critical lack of an international dimension in many aspects of university life. Japan has been in the status quo for education reform due to the country’s strict regulation and lack of support for transnational higher education. Foreign language has been the most focal barrier for Japan to enhance internationalization particularly because it is a non-English speaking country. Even though Japan has developed many projects for academic exchange and created more international environment in campus, its efforts to attract international academics and students are still far from adequate.

According to the report of OECD in 2009, Japan needs to consider several aspects of
internalization, as following: 1) the need for a more dynamic tertiary education sector, which
requires providing guidance into full adulthood life, such as social life and part-time employment rather than developing of intellectual skills or scholarly ability; 2) the need of autonomous institutions with extensive management and financial experience to take on the strategic management of autonomous and entrepreneurial university and institution; and 3) the need to change the idea of protectionism and conservatism in Japanese institution of higher education.

On the other hand, the education reform is acknowledged not only about developing international programs, but also a deeper change in the mind-sets of the university members and administrators on idea of alteration itself. In Japanese higher education, principally the university is described as the motions and carrying out ‘simulated’ teaching and research meanwhile industrial world prefers to do R&amp;D in-house rather than linking up with university research department. Continuously, the role of Ministry of Education, Culture, Sport, Science and Technology (MEXT) of Japan has intervened and controlled in some extents, especially allocating the number of students attending the university, resources, as well as raising and lowering student fees. Japanese institutions are extremely protectionist when it comes to receiving non-Japanese students and employing non-Japanese members of staff that actually is the need for challenge of globalization. Non-Japanese people who are willing to study and work in Japan have the perspective of a mandatory of mastering specific Japanese language level that makes them to deal with the language barrier. The MEXT’s statistic mentioned that there were fewer than 4 percent of Japan’s university students coming from abroad as many as 133,000 people, well below China with 223,000 and the United States with 672,000, even only 5 percent of its 35,300 university lecturers are foreigners in 2009. Therefore, Japanese universities are prerequisite to respond in the positive way to the risks and opportunities in the globalization era both collectively and individually.

To endeavor its effort, Japanese government has built The Top Global Initiative or Top Global
Universities (スーパーグローバル大学創成支援 Sūpā gurōbaru daigaku sōsei shien) under MEXT’s Global 30 program. It has been started from 2009 to 2014 as the first phase and continued from 2014 to 2023 as the second phase by adopting goal of increasing the number of foreign students as many as 300,000 by 2020 and having 10 Japanese universities rank among the top 100 universities in the world by 2030. The initiative has been used the dual concept of kokusaika (internationalization) and gurōbaruka (globalisation) aiming to 1) establish a system to provide classes in English, 2) improve the system for accepting international students, 3) promote international cooperation and 4) nurture superior personnel who can play an active role in the global arena in environment supportive of their growth in friendly competition. However, it has been commented regarding the contradictory goals in policy combining a nationalistic ‘closing in’ with a cosmopolitan ‘opening up’. For instance, Global 30 program supported 13 universities in creating English-medium undergraduate program in the first phase of 2009 for Japanese university’s preparation. In 2011, the government built the action plan of MEXT’s 2011 Re-inventing Japan Program under Global 30 program by emphasizing on international collaboration with Southeast Asian universities and other parts of the world. Apart from the Top Global Universities Program, in the same year, the Inter-University Exchange Project was launched in order to pursuit the furthering internationalism at Japanese universities. Following that, in 2012, the program was focused on global human development project, called MEXT’s 2012 Go Global to prepare Japanese students in particular.

Later, in 2014 the government selected 37 Japanese universities to be subsidized for 10 years
under the Global 30 program. The Top Global Universities are categorized into Type A (Top Type) Schools that boast world-leading education and research, and Type B (Global Traction
Type) Schools that are leaders in globalizing Japanese society overall. Since 2009 the Japanese government allocated as much as 7.7 billion yen or about 77 million dollars of budget purposing to significantly increase the number of foreign students in the country and the number of Japanese students studying abroad, hire international or internationally-educated faculty staff, and initiate internationally-oriented undergraduate curricula for undergraduate degree programs and student support. The effort has resulted as a successful movement. In 2017, as reported by MEXT, Japan had roughly 267,042 international student attending universities, vocational schools and Japanese languages schools because the government’s policy and support can give universities an international atmosphere and create international exchanges on campus as well as improve Japanese education and ability of research in Japanese universities.

For Japan, the internalization is not a new concept, but it has assumed a key position on domestic policy agendas for years, not only for educational and scientific reasons, but also for socio-economic consideration. It was started in the 7th century when major temple in Japan invited monks from China, India, and elsewhere to teach the way of Buddha. During this period, Japan also launched the first study abroad by sending young Japanese government officials and monks to study in China. Continuously, in Edo period, there were a small number of people sent to several countries. After the Meiji restoration in 1868, the sending system was reorganized to be under control of the central government. Therefore, internationalization during that time aimed to absorb Western advancement in order to ‘catch up’ with high-quality technology and scientific knowledge. After the end of the Second World War, the new Japanese government launched the initiative for Japanese students to study abroad for the purpose of learning democracy, contributing to Japan’s reconstruction and gaining mutual understanding with neighboring countries. In the 1970s, as Japan experienced rapid economic development, Japan became aware of its international role and status in the world not only in terms of economic and political but also in education. As an effort on internationalization of education, Japanese government announced the policy for international exchange aiming to improve the adequate system of acceptance of international students.

In 1980s, the Japanese government had seriously pushed to improve the quality of education by organizing the Ad Hoc Council on Educational Reform (Rinji Kyōiku Shingikai) directly under the Prime Minister Nakasone to discuss various educational reform and strategies, such as acceptance of more students from overseas targeting at 100,000 international students by 2000, development of student exchange program and international engagement in research project. From 2000 to 2008, Japanese government had been creating more projects on internationalization, including “Strategic Fund for Establishing the Headquarters in Universities. This internationalization policy has been continued until the current project of Global 30.

In the process of developing the internalization, Japanese higher education is advisable to
eliminate the idea of protectionism. For this, Japanese universities as well as Japanese society are required to accept diversity, particularly, recognizing its own multi-cultural identity and acceptance of ethnic minorities, including resident Koreans, Chinese and other nationalities. It is believed that the acceptance of its diverse identity will help to make the universities open to welcome the outsider to study.

Journals:
Akiyoshi, Y. (2009). The Internationalization of Japanese Higher Education: Policy Debates
and Reliaties. Retrieved from: http://www.cshe.nagoya-u.ac.jp/publications/journal/no9/13.pdf.
Aspinall, R.W. (2010). Education Reform in Japan in an Era of Internationalization and Risk.
Retrieved from: https://www.econ.shiga-u.ac.jp/risk/10/2/3/res.9/DPA3Aspinall201012C2.pdf.
Burgess, C., Gibson, I., Klaphake, J., Selzer, M. (2010). The Global 30 Project and Japanese
higher Education Reform: an example of a ‘closing in’ or an ‘opening up’?. Retrieved from:
https://www.researchgate.net/publication/263150304_The_&#39;Global_30&#39;_Project_and_Japanese_hi
gher_education_reform_an_example_of_a_&#39;closing_in&#39;_or_an_&#39;opening_up&#39;.
Hammond, C. D. (2012). Internalization of higher education in Japan: Recent trends and
challenges from a comparative perspective. The JASEC Bulletin, 21(1), pp. 47-54.
Yonezawa, Y. (2016). The Internationalization of Education in Japanese Universities: The
Effects of Institutional Structures and Cultures on the Management of International Education
Programs. Retrieved from:
https://pdfs.semanticscholar.org/7fbc/eb9384b8dd6a7e846c8a70470bf36a3f4dc9.pdf.