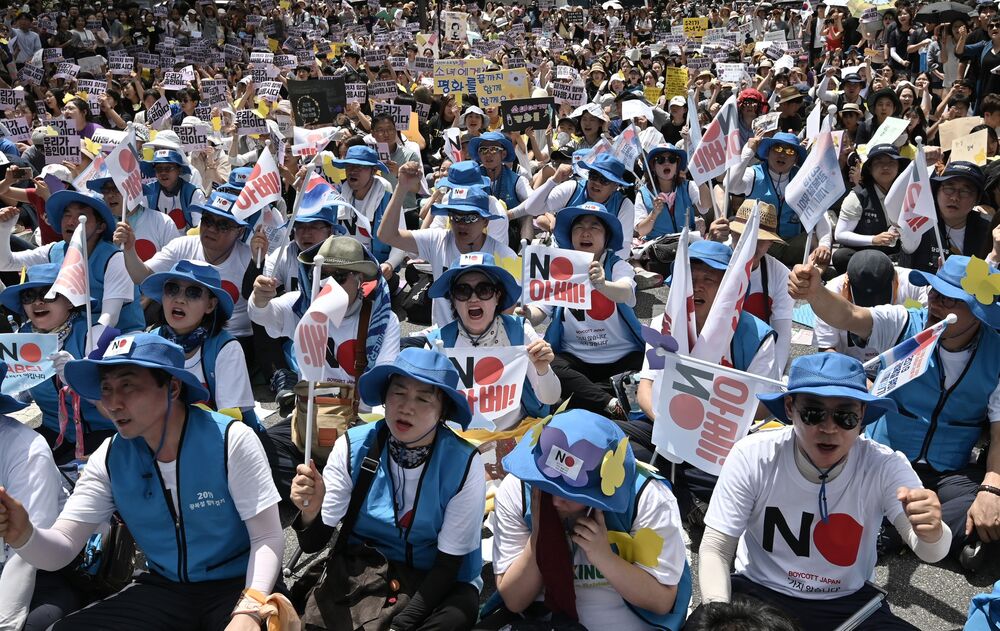 South Koreans participate in a rally against Japan’s trade restrictions on South Korea, in Seoul on Aug. 14. Photographer: Jung Yeon-je/AFP via Getty Images

On July 1, Japan announced that it would restrict the export to South Korea of three chemicals, such as fluorinated polyimide, photoresist and hydro fluoride which are used to make semiconductors and flat screen-key component of smartphones and other advanced technology due to national security concerns. Japanese officials have claimed that the measure was intended to prevent high-tech exports from being illegally transferred to North Korea that related to major threats of peace and stability. Tokyo cited that some companies have “inadequate management” of the chemicals which could be diverted for military use as a reason to impose restrictions as some reports asserted. According to Japanese broadcaster NHK, it was said that some of these chemicals, especially hydrogen fluoride, were being shipped to North Korea, potentially for use in chemical weapons.

In fact, the tension between Japan and South Korea is not a new phenomenon, but an
accumulation for about 30 years since Japan’s occupation of the Korean peninsula from 1910 to 1945 during the Second World War. To restore their diplomatic ties, in 1965, the two countries signed a treaty to give the monetary compensation to Japan’s forced Korean laborers by providing Seoul $800 million in financial, material aid and low-interest loans, settled all compensation claims “completely and finally”. It seemed that the relations between two countries could be in good condition. However, the issue re-emerged last October and November after South Korea’s Supreme Court ordered Japanese companies, including Mitsubishi Heavy Industries and Nippon Steel &amp; Sumitomo Metal, to compensate Korean forced labor victims. The response from Japanese side was that ‘it is unacceptable’. The companies have refused to
comply, based on Japan’s stance in the 1965 treaty. South Korea claimed that the agreement did not nullify an individual’s right to get reparations for wrong suffered under Japanese occupation. It was argued that the compensation which was invested by the South Korean government to lay the groundwork for its industrialization, had never been paid out to individual laborers. In its effort, Tokyo had sought the third-party arbitration to resolve the dispute over compensation for forced laborers, yet Seoul refused such an arbitration panel. Japan also claimed that Seoul has been rejecting Tokyo’s calls for related negotiations for three years. Even though Japan denied the impetus of its export restriction to South Korea because of court rulings, Japanese officials mentioned that it was due to national security concerns.

As a result, Japan as a global dominance supplier of these chemicals will make difficulties for South Korean companies to source for alternatives due to the fact that Japan produces about 90 per cent of the world’s supply of fluorinated polyimides and resists, and 70 per cent of its etching gas. For Korea, it was sourced 84.5 per cent fluorinated polyimide from Japan (import value of $19,720,000). Korea purchased 93.2% of its photoresists from Japan (US $ 298,980,000), and 41.9 the hydrogen fluoride ($ 66,850,000) that it used. This trade war, moreover, could affect an already slowing world economy, especially electronic industry including Korean chipmakers, like Samsung, SK Hynix and LG Display, and key component supplier to the likes of Apple in the US and Chinese telecommunications equipment giant Huawei which could fail to meet deadline of production up to 90 days. In fact, the market price of DRAM chips for immediate delivery has risen by more than 23 percent in two weeks.

In addition to the trade conflict, Tokyo, continuously, would involve removing South Korea from its “white list” of countries that received privileged access to Japanese exports by July 24. If Tokyo moved ahead with its plan and succeeded, Japan exporters would need licenses to ship to South Korea some 850 items that could be used in weapons-related applications. This might impact to the lose market share for Japanese suppliers, particularly the possible boycotts of Japanese goods in South Korea as well as mounting tension risk undermining security ties.

The Japan-South Korea trade dispute came at a time when lingering tensions between the U.S. and China continued to dampen economic activity worldwide. The U.S. and China trade war seemed to take a page from the President Trump’s playbook, turning trade into a cudgel. The U.S. President, for instance, had mixed national security and economic priorities as he has escalated his attacks on major trading partners, allowing him to label European and Japanese cars as national security threats and use threat of tariffs to force Mexico into tightening its stance against illegal immigration into the United States as well as fingered Huawei as national security
risk to China.

However, the trade tension between Japan and South Korea is different from the trade war between the United States and other countries, especially China, that only a handful of products are affected. Yet for Japan’s target is that South Korea is the biggest maker of chips, and Japan is the biggest supplier of the chemicals used in their manufacture.